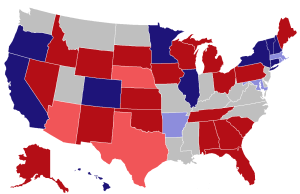 “I saw a commercial accusing Terri Lynn Rand(R) of being a part of the Black Panthers,” said Michigan resident, Katherine Galuki. “Which is not even slightly correct.”

“I was watching Anthony Anderson drop joke after joke, and then I saw a commercial for Mike McFadden saying that if I voted for Al Franken, he would come in my home and steal my wife and my television, all while laughing in my face,” said McRoberts.

Oregonian candidate, Monica Wehby (R) made a costly error in her ad campaign when she referenced drugs.

One of the most successful ad campaigns has been from Dick Durbin (D) of Illinois. While his ad campaign hasn’t been directly aggressive toward GOP candidate, Jim Oberweis, he has effectively targeted Illinois residents. His campaign reads:

If you vote for Jim Oberweis, your Facebook newsfeed will be taken over by hundreds of people who feel the need to voice their opinions of how they feel about the current political state of the country. Mothers and fathers will write paragraph upon paragraph about being ashamed to raise their children in America. Finally, college students and post-graduates will stop sharing funny videos, and instead paraphrase the latest rant they heard on MSNBC. Is this something you want to be a part of? Vote for Dick Durbin, and keep your newsfeed clean.

Julian Spencer of Illinois said, “out of all the campaign advertisements I’ve watched, that was by far the scariest.”