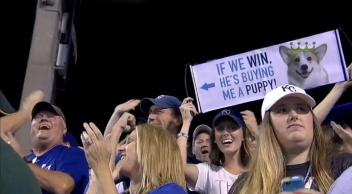 KANSAS CITY, MO — Bleacher Report yesterday wrote a heartwarming story about a Kansas City Royals fan being promised a puppy with a win against the Oakland A’s in Tuesday’s Wild Card game. What wasn’t reported was that the fan also promised to end all wars, hunger and violence with a Royal’s win on October 10th against the Baltimore Orioles.

“I’m calling it right now,” said the unknown fan/puppy promissory. “If the Royals win this Friday, I will usher in an era of world peace.”

The fan was asked how he would go about bringing peace and prosperity to a world plagued with war and strife, Ebola, ISIS, and Kanye West. The fan responded, “Well, you’ll just have to wait and see how the Royals do this Friday.”

While some people are calling the unnamed fan selfish, he has been met with reverence from Royals fans everywhere.

“You’d have to be a real ass to root for the Orioles Friday,” said Katie Jenkins, who has been a Royals fan since 1978, and who heard of the promise of world peace with a Royals victory. “What person, whose name doesn’t end with ‘Un,’ would root against world peace?”

When asked if she would still root for the Royals if an Orioles fan promised world peace with a victory, Jenkins responded, “Hell no! This is our year! Those Orioles can rot just like Baltimore in the 90’s.”