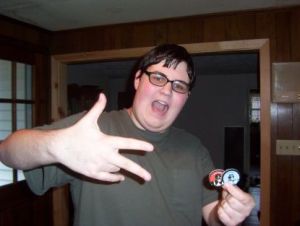 OXFORD, OH — Miami University freshman, John McAfee, says that after three weeks of being in college his college roommate was not who he thought he was.

“When I first got to into Miami and got my room assignment, I did the typical ‘get-to-know your roommate’ activities,” said McAfee. “We Facebook messaged and talked about what we would bring for the room, and everything seemed like it was going well.”

It wasn’t until the first week of college that McAfee felt like his roommate wasn’t exactly who he thought he would be.

“Ryan[McAfee’s roommate] said he was going to bring a rug, and instead brought a tiny bathmat for the middle of our room, and he asked me to take my shoes off before I step on it.”

“He would stay up until 4 or 5 a.m. every night making shadow animals against his side of the wall, using the clip-on lamp attached to his bed. He would laugh out loud any time he came up with a new animal.”

McAfee said it has also been hard to find alone time with Ryan always being in their room.

“He watches TNT dramas all the time. And I mean that in the most literal sense. When he wakes up at 9 am, he turns on Burn Notice. During lunch, he watches Dallas, and then from 3-6 pm he hops in bed with a Chicken Caesar Salad and turns on Charmed, for what he calls, ‘Ryan’s Witchy Marathon.'”

McAfee said while he’s contemplated switching rooms, he doesn’t have any plans to leave just yet.

“What would I say? I want to switch roommates because mine is weird as f***? I don’t think I can do that. I think I’ll just stick it out a little longer, but if he keeps waiting inside the door for me to get back from class so he can show me “neat” leaves and dead bugs he found outside then I think we’re going to have a problem.”