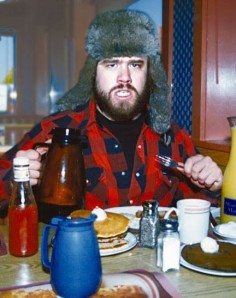 Authorities have identified Steele’s tree cutting partner and brand new employee, Austin Gladden, as the man to blame. It is believed that Gladden cut down his first tree, and didn’t yell, “Timber!” which is of course, what all lumberjacks are trained to do.

Fellow lumberjack, Terry Koal, explained the typical tree cutting process. “All you need to do is cut down a big ole’ tree, yell ‘Timber’ and be done with it,” stated Koal.

This brought up the question, “why didn’t Austin Gladden yell, ‘Timber?’” It turns out that Gladden was born a mute, and has never been able to speak. The two men’s boss, Anderson Dozier, was shocked when he had heard Gladden was a mute, even though he hired him.

“The qualifications for this job are simple,” Dozier explained. “You need to be big, have a legitimate beard, and keep to yourself.” Dozier went on to say, “it’s not unusual for a lumberjack to get hired after saying zero words during an interview.”

When asked if Dozier would fire Gladden, Dozier was shocked by the question, “Fire him?! Heck no, that man chopped down that tree in three swings,” proclaimed Dozier while neglecting the death of a human. “Plus, he wears flannel on top, denim on the bottom, and I’ve never seen his teeth. He’s a keeper.”

When we asked Gladden for a statement he looked at us with a blank stare, nodded, and immediately left the room.