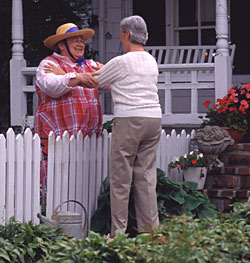 HOUSTON, TX — NASA announced today that they the could be on the brink of discovering life forms on nearby planets that would serve as Earth’s annoying neighbors.

“This is an incredibly exciting time,” said NASA Chief of Space Operations, Lisa Garvey, “We are close to being able to say, with authority, that we have found people on other planets who will ask to borrow our shovels and not return them.”

Garvey said that she hopes to not only find lone obnoxious neighbors, but whole families who will invite themselves over at the most inopportune time, and completely overstay their welcome.

“Clear out your refrigerators, because these new neighbors are bound to deliver a few over sized casseroles once they are discovered,” said Garvey emphatically, “and don’t forget about the rock-hard Christmas cookies, and grainy fudge sauce that will inevitably be headed our way as well.”

Garvey said that she predicts NASA will be able to discover not just planets containing irritating neighbors, but potentially planets with college-aged kids who play their music too loud.

“The possibilities seem endless, and we at NASA are thrilled with this potential discovery,” said Garvey. “After all who wouldn’t want more neighbors!?”