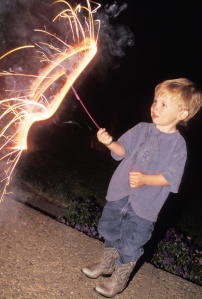 CHATTANOOGA, TN — The Fourth of July is a great American holiday, known for bringing family together, sharing some laughs and lighting off some celebratory fireworks. For the Gutwall family, their Fourth of July is rich with tradition. Jim Gutwall and his family always have a great time with their extended family. This summer though, Jim faces a new dilemma, his four-year-old, Tommy.

Tommy has been at odds with his parents the past few weeks on whether or not he’s old enough to light fireworks by himself. His rational parents have given a resounding “no” to Tommy’s question of “Can I light fireworks this year?” But that hasn’t stopped Tommy from throwing temper tantrum after temper tantrum to try and get his way.

Tommy said he thinks his parents are “stupid for not letting him play with matches,” and that he’s matured a lot since three years old. “I’ve got a whole year of preschool under my belt.” said Tommy while pointing to his 16 inch Power Ranger belt. “I just wish they’d let me do what I want.”

We asked Tommy what his favorite fireworks are and he said, “The kind that when you light it, it spins and then it goes up and it makes a noise like ‘zzzzzzzzZZZZZZZ.”” Tommy explained while spinning in a circle with his arms out.

Tommy said that if his parents don’t let him light fireworks this year, then he’s going to do the mature thing and defecate in his pull-ups. Tommy then began to cry after his mom wouldn’t let him peel his own banana.

“Everyone talks about the ‘terrible twos'” said Tommy’s dad, Jim, “but no one tells you how rough four-year-olds are. I’m just saying, Tommy is mean, and he can articulate his thoughts. One day he told me that his mom should’ve married a real man. I took that one to bed with me.”

Here’s to hoping everyone has a better Fourth of July than the Gutwalls.