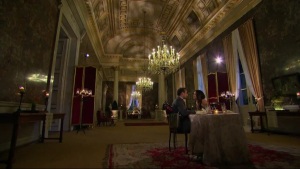 I apologize for the lack of a recap last week, as I apparently suffered some ill-advised head trauma. Let’s be serious though, the only thing of note last week was the guy administering the lie-detector test asking, “Have you eva faht in pooblic?” It was easily the funniest moment in the show’s history. Proving that fart humor still holds water. Enough talk about last week’s yawner, let’s get into last night’s episode.

Marcus looks like a deer in headlights most days Source: ABC

This week’s episode took the “sweet six” — Andi’s words, not mine — to Brussels, Belgium, which is oddly coincidental as the U.S. takes on Belgium in the World Cup knock out round tomorrow. #IBelieve…ABCrunstheworld. As the men gathered in their hotel rooms two questions were brought up: 1. Who fired Chris Harrison’s wardrobe monkey? and 2. When did the man-scarf become acceptable?

Marcus got the first date card, and he and Andi went around and ate mussels in Brussels — omg too cute. I’d equate Marcus to Lenny from Of Mice and Men, except instead of crushing a mouse with his large, oversized hands, he’s smothering Andi with “I love yous” and “I’m falling in love with you.” I will go out on a limb and say that both Marcus and Lenny might share the same IQ. Marcus even admitted that the date was the first time Andi actually “felt like his girlfriend,” however that didn’t stop him from using  the L-bomb as liberally as Mel Gibson uses  the word “Jew.” Marcus’ conversation about his dad resulted in Andi’s first De Niro face (see picture). After the dinner we got a full display of just how miserable Andi looks while kissing. She has a way of making dudes look like pythons devouring small bird, and it’s just generally uncomfortable. 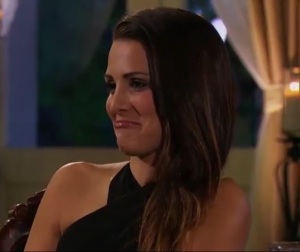 The next date card prompted Dylan to say, “You girls ready?” and that was when you knew he wasn’t going to make it through. Josh got the next date, BUT FIRST smug Nick decided to “make a move.” Nick, being the cunningly clever man that he is, went down to the lobby and pulled the old “I lost my room key, but the room is under my ‘wife’s name,'” That was so sneaky, I don’t even know how he hid those cameras from the concierge, nor do I know how she had that room key made within five seconds. The only plausible explanation I can come up with is that was the most bullshit scene ever. Not only was Nick the most unsteady conman since Michael J Fox, but that hotel employee would lose her job if she ever did that with a regular customer. After slick Nick got a hold of Andi they wondered around the streets of Brussels until they finally made out to the “Out of Africa” soundtrack.

Josh M got the second one-on-one date, and he made some moves. Josh is definitely this season’s Brooks, except I don’t think he’s going to bitch out in the end. Keep an eye on Josh’s shirt buttons, because I’m pretty sure he has to unbutton one each hour or he loses his slight southern accent. Can we also talk about Josh’s title as “Former Pro Baseball Player?” I just realized I have no idea what Josh does. If I walked around telling people that for a living a was a “former high school student” I think it would merit a few odd looks, so what in the world does Josh do now? My money’s on professional shirt unbuttoner.

The group date was even more lackluster than the rest of the show. The guys went to some ancient ruins and then to a sacred “no kissing” temple. I’m not really sure who instituted the no kissing rule, but it sounds made up. Chris and Andi had a nice moment where they made clay pots. It was kind of like the movie, “Ghost,” but more 4th gradish. In the end smug Nick got the rose, and was oh so smug about it. When Nick returned the Bachelorette was able to produce an overly long awkward silence, which ironically was broken by awkward Brian.

The cocktail party went on without a hitch except for when smug Nick took awkward Brian’s time with Andi, which was generally a dick move, but at this point what can we really expect from Nick? Something tells me he didn’t have many friends in college.

In the end it was awkward Brian and Patrick Bateman Dylan who got the axe (so to speak). Brian had to best exit when he goes, “Great, just great. They’re laughing, that’s what I want to hear.”

Next week is hometowns, and here’s to hoping that it isn’t as dull as this last episode.