Week 2 is in the books and we saw Libby’s prized stead go down! But first let’s get to the episode:

Chris Harrison gave his preliminary talk to Andi, asking if she was ready for the week ahead. Does anyone else feel like Chris Harrison’s theme song this season should be Biz Markie’s “Just A Friend.” He seems especially awkward this year around Andi, almost like he’s finally realizing he’s divorced and aging, and no one seems to like his shirts.

Andi’s first date was with Eric and they showcased a fantastic California clichè: “Braaa, in what other state can I go get my beach-chill on and shred my gnar gnar snowboarding in the same day?” We get it California…we get it. After Louie Vito got all handsy on Andi, Eric showcased his snowboarding ability, and how he is a great guy which consequently got him a rose. Congratulations ABC, you’ve succeeded in creating some of the hardest television to watch. First off, it is a shame Eric died. He seems like a genuinely terrific person. I get what ABC was doing when it decided to keep his scenes and “make this season a tribute to him,” but come on. When the guy starts talking about how he has a few exciting things he wants to mark off his bucket list, how many people watching wanted to go all Michael Scott, grab him and yell, “Don’t do it! For God-sake’s don’t!”

Following Eric’s date came a fantastic group date for so many reasons. We’ll get to “Mr. Fireball” Craig in a minute, but first let’s break down the male erotic dancers. First of all I love that Cody — who looks remarkably like a douchier Sean Lowe — stuffed his package to impress Andi, but also had the foresight to “not make it unrealistic.” After a contestant bared his goat for Andi, Chris Harrison once again delivered a fantastic moment when he “reluctantly” (and I use that word loosely) spanked one of the contestants, and that’s why he’s the host. Basketball coach and teacher, Brian then told Andi during a one-on-one session that he was nervous but hopes he made his kids proud. Yes Brian, I’m sure you made your kids proud by taking off all your clothes and turning in an 18+ performance for the night. In fact why don’t you go put that on your resumé right now, I’m sure a ton of schools would love to invite that lawsuit. 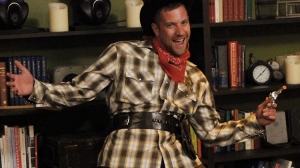 Ohhh Craig. Craig, Craig, Craig. Where to start. First of all, to the dude who was giving Craig shit for ripping shots before the strip show, he can go back to the vegan party he came from. If I’m going to go out and strip for a group of rowdy females, you better believe I’m gonna down some liquid courage before hand. Granted maybe Craig should have slowed down his crusade of binge drinking, but at least he wasn’t an asshole. In fact, I would say he was one of the most friendly people on the date, especially when he was talking about his man-crush Josh M. The best part though, came when Craig AMA’d Andi and lead with, “What do you like least about your parents?” I can only imagine what would have happened had Andi turned it around on Craig. I’m pretty sure would’ve seen some sort of rendition of Craig doing his best impersonation of “Drunk Uncle,” followed by him crying in Andi’s lap.

The next day Andi went on a date with Chris, who is quite possibly my favorite contestant to ever grace the show. During their date Andi and Chris went to a horse racing track that even ABC couldn’t doll up. Instead of a classed up place like Keeneland, they got Scioto Downs on a Thursday afternoon, complete with a bunch of background riff-raff and a kid playing with his grandma’s walker. Chris and Andi took their seats next to the only other couple not dressed in jorts and beaters, who completely ignored the cameras and asked them how long they had been dating…coughplantedcouplecough.

The date concluded with Chris and Andi dancing to the obligatory acoustic band that no one has heard of, even though Chris probably said something like, “I can’t even believe I’m here. Dancing with the woman of my dreams, and having This Wild Life play a private show for us.”

“I’m not a jock, but check out my mean stiff-arm” Source: ABC

Cocktail Party Quick Slants: Josh M had a fantastic boob glance right when Andi walked in. No part of it was subtle. Surprise, surprise, Bradley sung opera at Andi. I’ve decided singing opera for a single person is up there with demonstrating your MC skills for someone, it’s just loud, in your face, and really, who cares? (Unless your Juan Pablo, but let’s be serious I’m pretty sure he just wanted to see how wide Sharleen could open her mouth.) What would Andi do if Craig sang out of tune? Would she stand up and tell him he’s a drunk? Hey Craig, I bet I can guess what your parents like least about you…and Josh M showed Andi his stiff-arm.

Nick S, Craig, and Carl were all eliminated last night, and Andi delivered her first BS of the season telling Craig, “I respect you so much.” Yeah, and I enjoy licking sand paper. You better believe Craig was doing shots all the way to the airport while talking about his stupid parents.